The only thing left of the original Torrot is great memories of times past when motor vehicles were an extremely important way of getting around town and reactivating the national economy. Founded in Vitoria by Don Luis Iriondo in 1948, Torrot got its start manufacturing sturdy touring and road bicycles, while Orbea and BH also appeared. In the 1950s, Don Luis reached a license manufacturing agreement to make the mopeds and motorcycles for the famous French brand Dijon-Terrot, creating Terrot S.A.E.

But the agreement didn’t last very long, and in 1958 Peugeot absorbed Terrot and then shuttered it two years later, in 1960, leaving Iriondo S.A. without the license. Upon which the clever, stubborn Don Luis changed the “e” for an “o” to keep his entire family of mopeds and lightweight motorcycles afloat, now developing them with an identity of their own. Hence Torrot was born: from the tenacity and passion for motorcycles.

So Torrot was the outcome of a small yet great visionary’s passion for motorcycles. From then on, through his perseverance he ran the companies through its good years with the brands Torrot and CIL.

We could say that Don Luis and his brand, Torrot, were something like the Tucker of Spanish motorcycles: they were indestructible and brought innovations that would later become popular, like the retractable sidestand and the scarf-style upward-facing exhaust pipe.

In the 1970s, Torrot not only manufactured good, popular motorcycles like the Mustang and the TT, powered by Sachs engines, the outcome of a new alliance, it also started to manufacture such popular bicycles as the Cross MX in “summer blue” (the forerunner of today’s mountain bikes). However, just like so many other Spanish brands, it did not survive the 1990s. 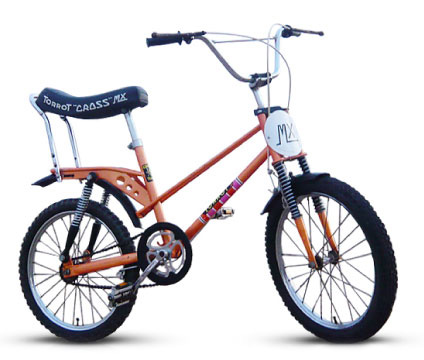 There are a few “legends” online… Yes, there is a bit of mystery surrounding the brand ;-) Just like there is also a bicycling culture, with outstanding bike restorations… but let one thing be clear: today Torrot has an electrical heart ;-)

Torrot stopped manufacturing its reliable and – still today – popular bicycles and then was reborn in 2011, driven by a venture in which the passion to supply people with a sustainable, practical, popular means of transport is once again the maxim.

We have been designing our new family of products for two years, and now you can enjoy our new electrical and hybrid vehicles designed to go down in history.